With TKB as architect, the Regional Transportation Authority consolidated its headquarters in a single 28,000 square foot floor in Chicago. The RTA’s formerly traditional office space standardized on efficient workstations for each employee and takes advantage of the natural light afforded through the building’s interior light court and exterior windows.  Collaborative spaces with accessible technology, large and small, are distributed throughout the floor. The break room, connecting to daylight and the perimeter, can double as a large reconfigurable, all-hands meeting space when sliding glass walls are retracted to join adjacent conference rooms with the break area. 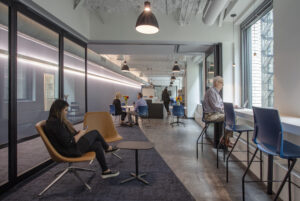 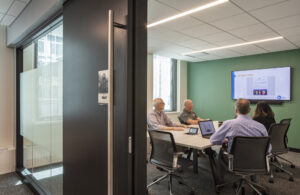 Signage with photos of RTA commuter stations reinforces the RTA identity and will integrate with the Authority’s collection of transit-based art.